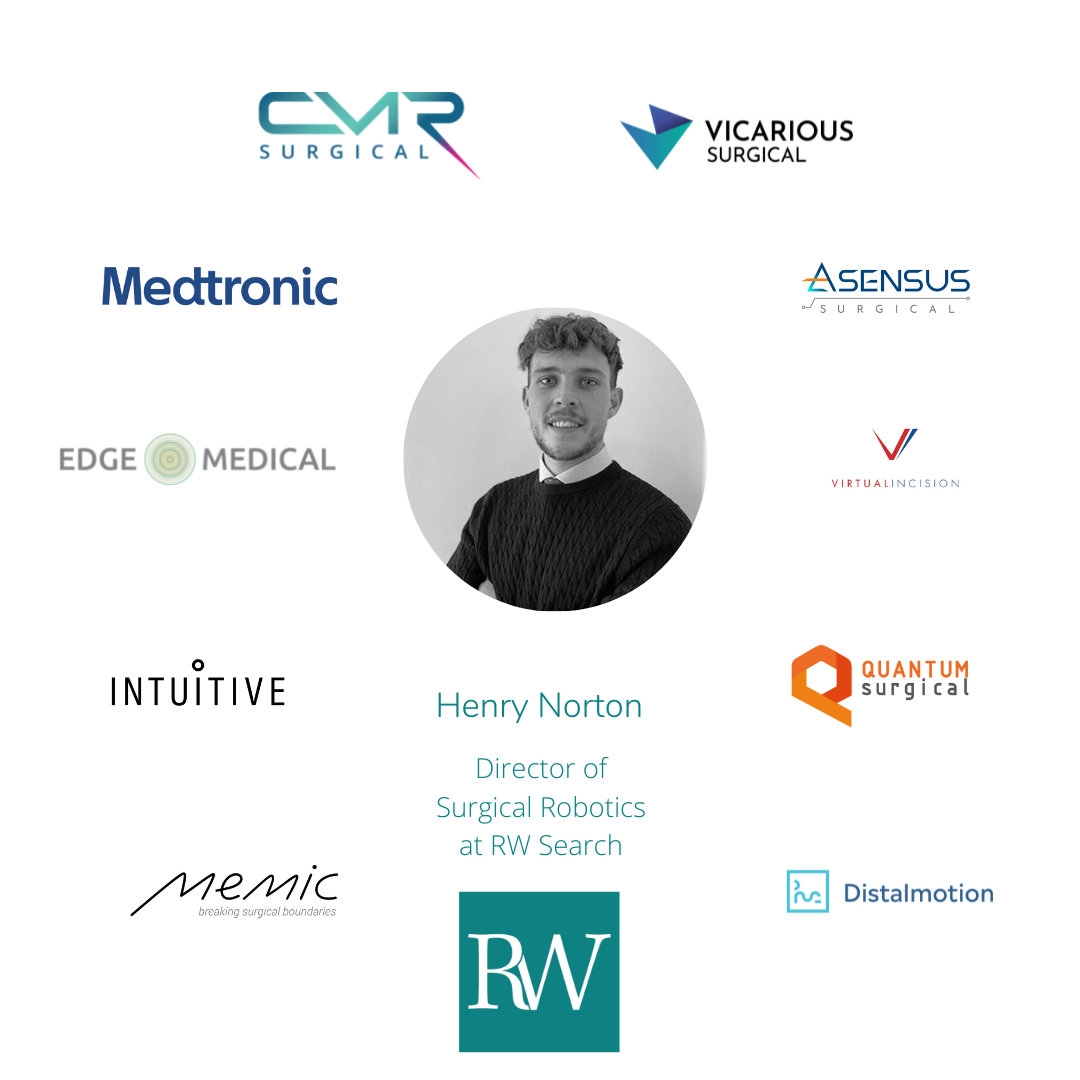 As we enter the new year, and after indulging way too much over the Christmas period. I thought it would be a great opportunity to sit down and reflect on the last 12 months within my specialist sector of Surgical Robotics. And what a year it has been for the space, from colossal funding rounds to global clearance, and market entry from the goliaths of industry. 2021 has been a huge year for the space and seeing so much traction has been very exciting.

I wanted to look at the money involved and the regulatory clearances to really get a good overview of some of the major headlines from the year and finally hypothesis where 2022 could be taking us from a variety of different perspectives.

We have to start by talking about the sheer volume of procedures that have been completed with the da Vinci. As the company that has been responsible for the growth of surgical robotics, completing 10 million procedures is a huge milestone. What is maybe more surprising to me is that every 25 seconds, somewhere in the world, a surgeon starts a new procedure using a da Vinci, which means by the time you have read this piece depending on your reading speed approximately 20 people will have started life saving procedures.

In June of last year, UK-based robotics company CMR Surgical announced a $600 million Series D. This latest round, led by SoftBank’s Vision Fund 2 and co-led by Ally Bridge Group, joins an existing $384.8 million already raised by the Cambridge firm. It values the company at $3 billion.

The funds are being used to increase the global commercialisation of Versius®, its next-generation surgical robotic system, and further develop its digital ecosystem. This financing equips CMR with significant funds to accelerate its mission of bringing Versius® to hospitals worldwide and will enable significant technology developments and global expansion.

Vicarious, which has sought to bring robotics and VR to minimally invasive surgery will trade on the New York Stock Exchange under the symbol RBOT after the merger with D8 Holdings. This acquisition will add more than $425 million in cash to Vicarious’s balance sheet upon the deal’s close, including a $115 million private investment in public equity priced at $10 per share.

The SPAC deal comes nearly a year and a half after FDA provided breakthrough device designation for Vicarious’ robot, which includes features such as arms that replicate a human motion.

Blink and you will miss it, Edge Medical had a substantial raise in November. Edge Medical Robotics CO. Ltd. Raised $200 million in a series C round and plans to use the funds for the commercialisation of its core products. The investment highlights the potential of the sector from China.

Dr. Wang Jiancheh, founder of Edge Medical Robotics, said that the new funds are for business upgrades in an all-round way and the rapid commercialisation of core products, such as the deep expansion of product R&D, construction of large-scale production bases and training centres, and comprehensive commercial layout.

Virtual Incision Corporation announced this year that it has raised $46 Million in a Series C funding round to advance the first-of-its-kind MIRA® Surgical Platform. The round was led by Endeavour Vision and Baird Capital, with participation from returning investor Bluestem Capital and others. The funds will be used to support the regulatory and clinical programs leading to the commercialisation of the company’s MIRA® (“miniaturized in vivo robotic assistant”) Surgical Platform.

Funding from the round will also be used to support the company’s research and development pipeline. Beyond its initial device design for colon resection, Virtual Incision has begun developing a family of mini robots optimized for additional operations such as hernia repair, gallbladder removal, hysterectomy, sleeve gastrectomy and others.

Quantum Surgical secured €40 million (US$48 million) Euros to support the commercial launch of Epione®, led by existing key investor Ally Bridge Group (“ABG”) with an investment of €20 million (US$24 million). This round also includes funding from the European Investment Bank, Bpifrance, and Caisse d’Epargne Languedoc Roussilon. This brings the total amount of funds completed by Quantum Surgical to €50 million since its inception.

Following the CE mark approval announced in September last year, this funding will enable Quantum to accelerate the clinical adoption of Epione®. The investment is being made through the 25 billion European Guarantee Fund to support the recovery of European businesses following the COVID-19 pandemic.

In the increasingly congested market, Memic contends the small size of its device and its potential to enable more hysterectomies. Memic Innovative Surgery merged with a SPAC this year, which will enable it to grow sales to $136 million in 2025

Memic is pitching the device as the first FDA-authorized surgical robot with miniature arms that bend like human arms and have 360-degree articulation. The FDA authorization covers the use of the system in the removal of the uterus for non-cancerous conditions and removal of one or both fallopian tubes and ovaries.

Medtronic secured European approval this year for its Hugo™ surgical robot, moving the company closer to rival and market leader Intuitive Surgical. Hugo™ gained CE approvals for gynaecological and urological procedures, which Medtronic contends make up roughly half of all robotic procedures currently performed. Medtronic stated that the device was developed to address issues, such as cost and usage barriers, that have restricted the adoption of robotic surgery for the last 20 years.

Hugo™ also performed its first human procedure in the summer – a minimally invasive prostatectomy in Santiago, Chile. It has since expanded to Latin America with a series of initial gynaecological surgeries completed in Panama City, Panama.

Asensus Surgical scored a hattrick last year with a trio of clearances for components of its Senhance® robotic surgery system.

The most recent was its FDA 510(k) clearance for the expansion of the machine vision capabilities of its previously cleared Intelligent Surgical Unit (ISU) on the Senhance® system. With the existing capabilities of the ISU, surgeons have machine-powered control of the camera via responses to commands and identification of some objects and sites in the surgical field.

This year, Swiss-based surgical robotics company Distalmotion SA has hit a regulatory milestone in the commercialisation of its surgical robot, Dexter, earning a CE mark in Europe. The Dexter surgical robot is built with the aim of allowing surgeons to take a hybrid approach to minimally invasive surgery, using the robot for tasks such as suturing and complex dissections while switching to a laparoscopic approach for stapling and basic dissections.

Obtaining CE Mark is a major milestone paving the ground for the clinical use of Dexter in Europe. Dexter has already garnered tremendous interest in the surgical community, and we look forward to witnessing the increasing demand for a medical device removing the complexity out of robotic surgery to fast track its widespread adoption in minimally invasive surgical care.

It is not just funding rounds that Quantum have gone through this year but also obtaining CE mark approval for Epione®, its robot designed for minimally invasive treatment of abdominal tumours. This authorisation allows the commercial launch of Epione® on the European market.

The CE mark follows the successful treatment of 21 patients with the Epione® robot in a multi-centre clinical study completed earlier in the year.

This is a great achievement for Quantum Surgical, as the CE mark approval is the starting point towards the commercialisation of the system. This clearance will allow many patients to benefit from the Epione® as there is a significant unmet need for minimally invasive therapies in cancer treatment.

Looking to the Future

I foresee 2022 being a waterfall of investment, where new players will enter, acquisitions will happen and there will be some major changes in the arena. With multiple clearances on the horizon, there will also be entry into new therapy areas and further globalisation will be realised as we see the APAC & EMEA markets catch up with the US & Israel. We can already see France & China as two areas where investment and development are ramping up massively. Integration of new technology will increase and we will see more of the key areas regularly highlighted e.g. AI/ML, 5G, Digital Ecosystem etc. however there are a few areas which do not get as much screen time which I will outline below.

One key trend I foresee is miniaturisation, meaning the development of smaller more flexible systems. With operating room space restrictions, robotic systems need to be compact, more customisable, and more adaptable. Robots are no longer seen as big and cumbersome machines that dominate the OR; and smaller more adaptable systems will be at the forefront of purchasing decisions and, will be a key consideration for surgeons and health systems alike.

AR/VR Integration has been on the lips for a while now, however the integration of augmented and virtual reality is only going to increase. Not just from integration with a system in the OR but also within the training aspect, which will ultimately help with wider spread adoption of robotics. With VR training platforms, a surgeon will be able to practice without the need for Cadaver, or live surgery. Ultimately, a junior surgeon will be upskilled within robotic surgery without the need for practice on a big piece of capital, and can make mistakes without consequence, which is innately how humans learn best. One company you should keep an eye on is FundamentalVR.