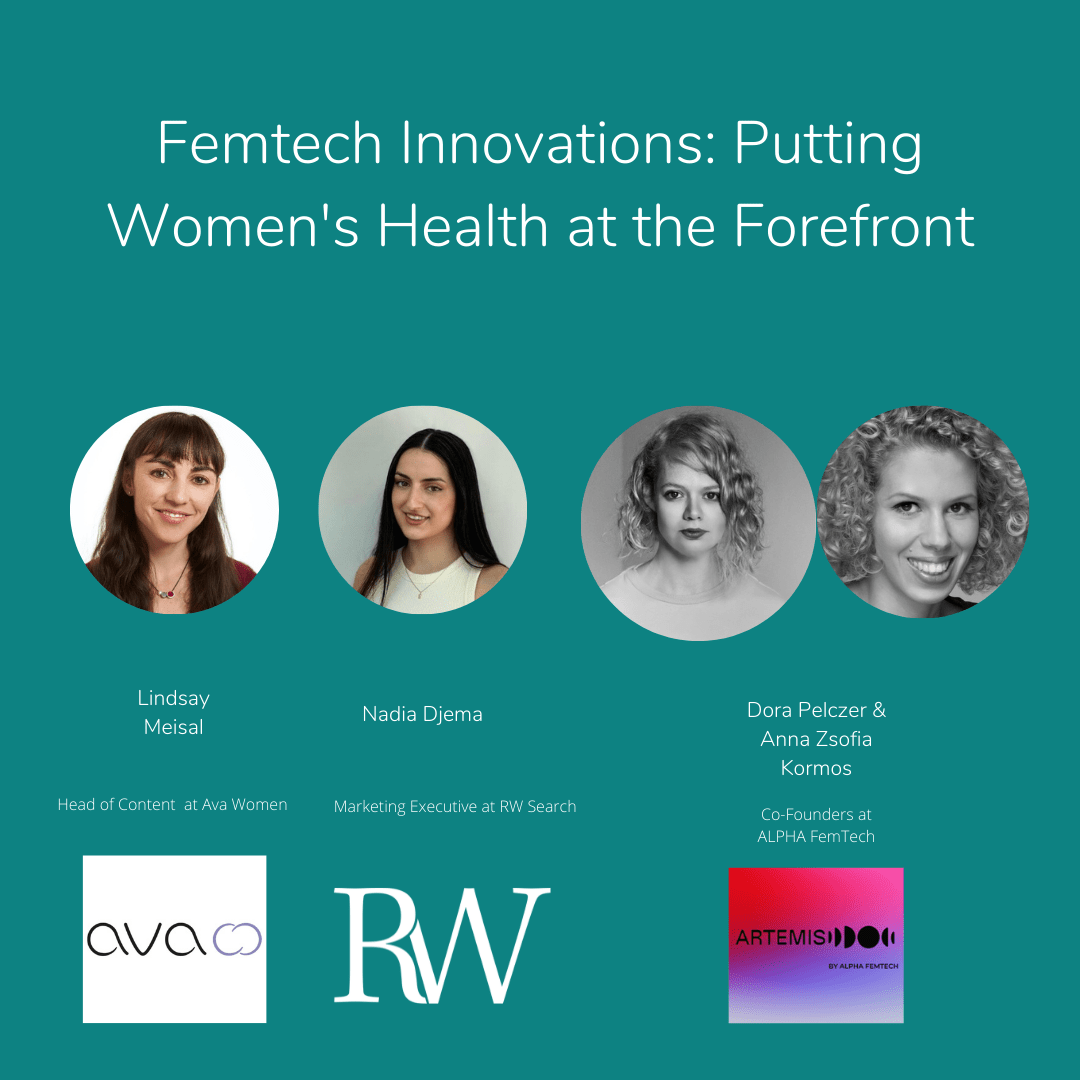 Although still a relatively young sector, the FemTech industry is certainly having its moment, with women’s health needs being positioned at the forefront of an investment boom..

We’ve all experienced women’s health issues either first or second hand; whether you’ve tested a range of contraceptives before landing on the one with the least side effects, witnessed a friend suffering from the excruciating side effects of endometriosis, or heard about a couple’s frantic attempt to track ovulation in order to conceive. Now, FemTech innovations are playing a vital role in helping to break taboos around women’s health and provide effective solutions.

FemTech aka female technology refers to software, diagnostics, products, and services that apply technology to improve women’s health, and the term was coined by women’s health entrepreneur, Ida Tin, who founded Clue, a period tracking app that’s helping women to understand and accept their bodies. This industry utilizes digital health products to motivate women to access and use applications for managing health issues. FemTech not only allows women to be more aware of their bodies, track their period, menstrual pain and mood, fertility, etc. but build digital communities where women can feel understood, heard, and supported.

So, what’s behind this booming industry? There are several factors feeding the recent growth, with the most pertinent being the continual wave of female empowerment; women are increasingly sharing their problems and have realized that there aren’t many solutions tailored to their needs.

Along with this, one of the main reasons women-related needs had not been focused on in the field of technology was that medical research was overwhelmingly “tailored to the male body”. In 1977, the FDA excluded women of childbearing age from taking part in drug trials due to a belief that menstrual cycles or pregnancy could impact the process. Since then, women have been heavily underrepresented in drug trials.

Cultural shifts sparked by events such as the MeToo movement and a growing interest in diversity inclusion have been beneficial for this industry, and this month I was excited to sit with two highly innovative and progressive FemTech companies, each exemplary of hugely relevant areas that are finally receiving the recognition they deserve.

Firstly, I spoke with Lindsay Meisal, Head of Content at Ava women, a Swiss fertility wearable company based in Zurich, that offers an innovative bracelet tailored to provide data-driven support. This sleek sensor bracelet has been proven to help couples get pregnant faster, which can reduce the need to move on to costly or invasive treatments.

“Ava’s preconception care model includes a fertility tracker, worn only at night while a woman is sleeping. It tracks five physiological signals. This allows Ava to detect in real-time the 5 most fertile days of a woman’s cycle which is extremely helpful information if you’re trying to get pregnant”.

75% of women don’t know the best time in their cycle to conceive, and many people are still of the belief that every time you have sex you could get pregnant; however, that’s not the case at all. In a woman’s cycle, conception is only possible from intercourse that occurs during a six-day window: the five days preceding ovulation and the day of ovulation itself.

Ava tracks physiological fluctuations while a woman is in her deepest sleep when the body’s fully at rest. Ava’s machine learning algorithms detect the fertile window based on the user’s physiological signals. The heart rate, temperature, skin profusion all change based on hormones, and these hormones follow a predictable cyclical pattern throughout the menstrual cycle.

“The Ava bracelet is worn at night, then synced with the Ava app in the morning. The user can instantly see her fertility predictions for the day based on what happened the night before”.

In terms of Ava’s competitors, it seems that there aren’t any. There have been several methods of tracking ovulation that women have used for decades now, including ovulation prediction kits (OPKs) and basal body temperature tracking. However, there are flaws in both methods, which aren’t the most romantic or stress-free experiences. Temperature tracking, for example, cannot predict ovulation in real-time, only offering a result prior to, or straight after ovulation has occurred.

“Sometimes tracking everything can feel like a second full-time job and women are the ones taking on that burden, so we wanted to create something that was very convenient and fits into a woman’s busy life.”

Lindsay explained that Ava is also working on a contraceptive product. Many women, including myself, have experienced adverse mental and physical side effects from hormonal birth control methods, and the concept of a wearable alternative is a game-changer for the women who may have suffered through the trials and tribulations of hormonal contraceptives.

The Ava bracelet has been available as a DTC product since Ava launched and is increasingly being offered by employers as a covered benefit. When something like this is covered by an employer, it makes it a lot more accessible to all women, and this will be an exciting progression in making fertility tracking and contraceptive health that little bit more stress-free!

90% of women experience various discomforts during their periods such as stomach pains, bloating, pain in the lower back, or weakness around the thighs. Off the back of this, Alpha Femtech decided that these side effects should no longer have to be a hindrance to women’s daily lives. The early-stage start-up from Hungary, founded in 2020 by Anna Zsofia Kormos and Dora Pelczer created the ARTEMIS; a bodysuit designed to relieve and measure a woman’s menstruation.

The ARTEMIS is an intelligent smart tech bodysuit with two medically proven techniques to reduce period cramps. Named after the Greek goddess of the moon, this bodysuit aims to combat pains through micro-vibrations by regulating heat release to the body. The end goal is to connect the physical prototype to various digital platforms in the future to fight period poverty and educate women across the globe.

Even though it is still very early stage, tests have shown promising results females experienced a decrease in their menstrual symptoms.

“R&D of the device showed that the body significantly reduced the level of pain which effects persist even after the use of the device. 40% of test subjects reported a reduction in their other menstrual symptoms, such as bloating, low back pain, and weakness around the thighs.”

The device not only relieves pain, but tracks and evaluates one’s menstruation, and this information can even be used to enable gynaecologists to diagnose a painful condition called endometriosis, or to aid in research surrounding this condition. The product itself can connect to an app allowing the user to personalise the strength and the module of the pain relief.

“The product is made up of 3 major elements; one is the bodysuit, one is the digital device which connects communication between the hardware and the software, and the app which can soon be downloaded onto phones. You can use this to change the settings; for example, the heat and micro-vibrations enable the user to create their own personalised therapy.”

Dora and Anna explained that they wanted to redefine the often intimidating nature of medical devices. Women often feel unattractive or less confident during their period, and with this in mind, they decided to integrate everything into a bodysuit that is both comfortable and efficient.

The bodysuit offers a unique physical experience and can be worn discreetly under clothing, providing the wearer with a cooling sensation in areas of pain. ALPHA is looking into doing more developments in the future in terms of designs once the original prototype has been realised.

Alongside the game-changing bodysuit, a long-term goal for the company is to build a network to improve sex education in young women in Central and Eastern Europe. Anna and Dora explained that the reasoning behind this is that in third world countries there are already many charities that assist these issues. However, in their research, they found that girls are generally extremely uninformed and uneducated about their menstrual cycles in rural Eastern European towns.

Anna and Dora are passionate about building this network, and the long-term plan is to offer workshops around this topic in rural schools. In the short term, the goal is to work with different NGO’s/organisations that already have the infrastructure to help offer a percentage of Alpha’s profit to use. Although the bodysuit is yet to commercialise, this company is already taking a huge step towards pain-free periods and alleviating period poverty.

It was a pleasure learning some more about these exciting companies and I appreciate them sharing their knowledge with me. While there’s still a lot to do in fighting taboos and closing the gender gap in access to medical care, wellbeing resources, and knowledge, we’re clearly on the right track to do so. It’s exciting to see a greater interest in this field, and the development of so many innovative technologies, and I’m optimistic that as scientific innovation into women’s health accelerates, so will the quality of our day-to-day lives.